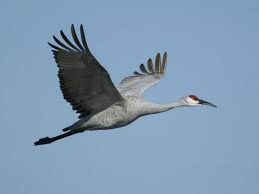 Sandhill Cranes have a southern breeding range not too far north of Manhattan, in upstate New York, Connecticut, and Massachusetts. They frequently stopover in nearby Somerset, New Jersey, during migration. They breed in wetlands, and they will touch down in those or in expansive grasslands. They are not likely ever to land in Manhattan, and they are known to fly very high when migrating, which explains why they are so rarely observed here despite having a nearby presence and being large, unmistakable birds.

It never occurred to me that they even were a possibility until a birder reported one flying over the Bronx Zoo in May 2016. A report of seven Sandhill Cranes flying over Fort Tryon Park in Manhattan followed in December 2016. Then three more were seen over Fort Tryon in January 2017 by the same observer. It’s likely that another two were seen from midtown over the Hudson in December 2017.

These observations stoked my interest, but I saw no practical way to get the birds. Sandhill Crane appearances were not part of a daily movement pattern — they were notably infrequent. Plenty of birders were reporting from the Inwood area most days and not seeing any cranes. A dedicated Sandhill Crane watch of any length would almost certainly produce none. Still, it was a species to keep in mind.

Yesterday, 16 October, I went to Inwood Hill Park to do some sky-watching and river-watching. It was a decent, sunny morning with moderate northwest winds, and I was seeing some Bald Eagles floating overhead. Brant flocks were moving low down the Hudson.

At 11:48 a.m. I saw high-flying bird over Inwood Hill with just my eye and I focused my binoculars on it. It clearly was not a goose or a raptor. It had long, broad wings beating slower than a goose’s would, a long, outstretched neck, and feet trailing outstretched behind it. As it turned into sunlight, I noticed grey wings and body, and briefly a pale cheek patch and darker crown — a Sandhill Crane, flying southwest over the Hudson.

With only three other birders on record as having observed a Sandhill Crane in Manhattan in three other occurrences, the species must be considered among the rarest few I have had here. The North American population appears to be continuing a multi-decade trend of population increase, so perhaps it will appear here more frequently in the future.