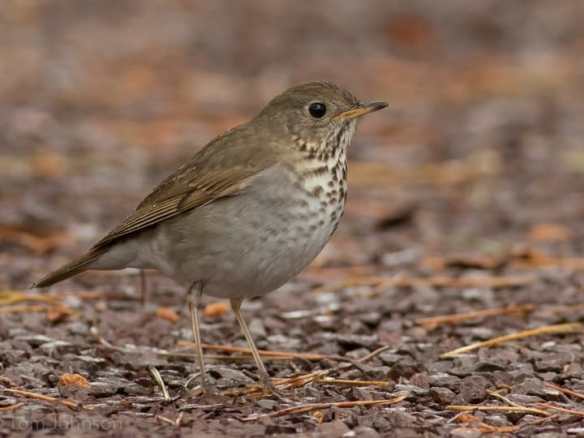 This morning Roger Pasquier heard the song of a Bicknell’s Thrush at Evodia (the Ramble bird feeder area). He later told Anthony Collerton about it and pointed out the bird, a warm-toned thrush associating closely with a grayer Gray-cheeked Thrush. Collerton issued a Manhattan Bird Alert (follow @BirdCentralPark on Twitter) to let everyone know. He himself had not heard the bird sing.

I arrived at Evodia some minutes later, after Collerton had left, and quickly found a pair of thrushes on the east side of Evodia that matched the stated description. I announced my find to other birders nearby just as the bird was flying to the west side of Evodia.

As I have written before, visual identification is not sufficient to claim a Bicknell’s Thrush, as Gray-cheeked can look much the same. One needs to hear the Bicknell’s song, which ends with a thin, rising pitch.

Both thrushes were staying silent and had wandered out of view. When we started playing the Bicknell’s song on a mobile phone, one of the thrushes came back into view and perched overhead, calling “whee-er”. Soon it flew down and sang. We had our Bicknell’s!

Shortly thereafter I called it in again for Anders Peltomaa and Al “Big Year” Levantin and elicited singing in response. Same later for Joseph DiCostanzo and his American Museum of Natural History walk.

I also heard the Bicknell’s Thrush sing on its own, unprompted, just east of the Gill Source at 10:18 a.m.

A half-hour later Robert DeCandido came by Evodia and helped members of his birding walk see and hear a singing Bicknell’s Thrush.

American Bird Conservancy President Mike Parr and his group were nearby at the time and might have heard the Bicknell’s song. To be sure, I used my phone to call it back again and everyone got close views of the calling and singing  bird.

Bicknell’s Thrush remains a rarity not just in Central Park but throughout its tight migration range along the East Coast. Since identification requires hearing its song, it is possible to get it only during spring migration. Even then, the time window seems to be narrow — I have never had Bicknell’s on more than one day in any May, and there are usually at most only a few days in any May when I hear much thrush song in Central Park. The possible date range for it here seems to be May 12 to May 25, judging by historical Central Park records and my own experience.

When I saw Kevin Topping’s 5:05 p.m. tweet of a “possible” Kirtland’s Warbler on the northwest side of the Central Park Reservoir, I immediately relayed it to Manhattan Bird Alert (@BirdCentralPark). Of course I had some doubts — Kirtland’s Warbler had only one confirmed eBird record in all New York State (2014, Hamlin Beach State Park on the shore of Lake Ontario), and a female Canada Warbler would be at least 10,000 times more likely.

By 5:15 I had heard from a friend that Kevin was “fairly sure,” so I got ready to chase. Along the way I received a photo of the bird, which strongly supported the ID.

Because I did not know the exact location of the bird, I ended up taking the longer route around the east side of the Reservoir. I finally saw Kevin at 5:31 p.m. at 91st Street and West Park Drive, but he no longer was on the bird.

Then Ryan Zucker arrived, and soon he and his mother had re-found the bird slightly northwest of the previous location. From that point forward the bird stayed in view, sometimes moving from tree to tree but remaining in the same general area, where it had an abundance of insects on which to feed. It had been a hatchout day in the park, and many other warblers were enjoying the feast.

On the way I had privately posted Andrew Farnsworth of the find, and by 5:58 p.m. he had it, too — the only bird native to the continental United States that he had not yet recorded.

It likely is the rarest bird that has been found in Manhattan during the time I have been birding. By the time I left at 6:29 p.m. over 100 birders were on the scene.

Surely some birders will be traveling to Central Park tomorrow from all over the region, hoping to re-find this bird. Manhattan Bird Alert will try to keep everyone informed!