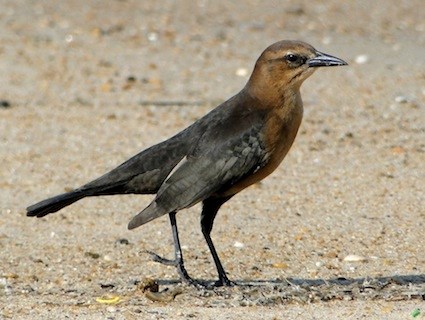 As I have written before, Boat-tailed Grackle is not a species you should expect to find in Central Park even though it breeds in the New York City area and in neighboring New Jersey. When it is reported in Central Park, it is almost always a mistake. Common Grackles vary in size and tail length, and if you look at hundreds of them you are likely to find some that look larger than the others. A male Boat-tailed Grackle is not easily distinguished from a large Common Grackle by appearance alone, though the rounder crown shape of the Boat-tailed and the very large tail, often held in the shape of a “V,” are key features. Song and calls diagnostic for distinguishing these two species.

If you want to confidently identify a Boat-tailed Grackle amidst a loud flock of Common Grackles, your best hope is to find a female or immature. It’s overall brown color suggests Rusty Blackbird, but its long, thick bill and much larger size (as large or larger than Common Grackles) easily clinch the ID.

Recently in Central Park eBird reports of female Boat-tailed Grackle have appeared, with the first being on November 17. This report failed to give a specific location and was entered after sunset, despite referencing a morning birding time. A more reliable report, complete with photo and Sheep Meadow location, was submitted on November 25. This one also was entered late, but not so late as to make chasing impossible. I received the eBird alert at 2:49 p.m. and shortly after 3:00 I was running to the southern end of the park to do some searching.

By then the large grackle flock reported and photographed in the early morning was gone. It was a mild day, and the Sheep Meadow and surrounding lawn areas were filled with people. I found a smaller Common Grackle flock in the trees of the Hallett Wildlife Sanctuary, but I could not pick out any Boat-tailed Grackles.

The following day, that of the Hammond’s Flycatcher discovery, another eBird report listed Boat-tailed Grackle. this time in the Ramble where I had already spent much of the day.

Two days ago, on Saturday, December 2, I had what I thought was a prime opportunity. A user of Manhattan Bird Alert reported a female Boat-tailed Grackle among a large Common Grackle flock on Cedar Hill. Minutes later, as I was on my way, this finder noted that the flock had been startled and flew south toward the Boathouse. Despite much searching in that area and in areas to the south, I never found the flock.

Another bird alerts user reported seeing the flock at Maintenance and then watching it quickly fly north. I headed north, scanning the lawns on the park’s west side. I did not find any grackles whatsoever.

Yesterday I was birding with Robert DeCandido and Deborah Allen’s group, which was on its way to the Pond to see warblers and waterfowl. I remarked to Robert, as we were passing Cedar Hill, to keep an eye out for grackle flocks.

As we approached the Sheep Meadow, I saw a massive blackbird flock — hundreds of Common Grackles along with many European Starlings. I quickly eyed a leucistic Common Grackle, and remarked that it probably was the same one photographed on November 25 in the flock with the female Boat-tailed — which might be here, too.

The flock flew west, re-settling on the northwest corner of Sheep Meadow. I ran to chase it, and began scanning. Soon another member of the group spotted the immature (likely female) Boat-tailed Grackle under a nearby tree. We got close looks and were able to take good photos.

For me and everyone else in the group it was a new lifetime bird for Central Park. We later had the bird again that day in the trees of Hallett.

Prior to November, the last verified report of Boat-tailed Grackle in Central Park was on April 20, 2011 — a male that seemed to have been lingering in the area south of the Meer for perhaps a couple weeks, and whose distinctive sounds were noted.