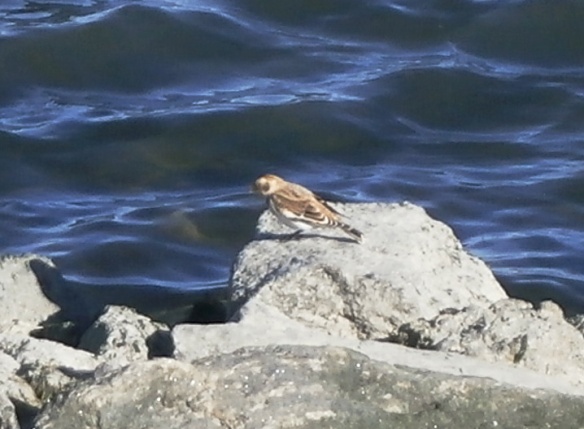 Snow Buntings are a rarity for Manhattan. I am delighted to have had them for a second time this year (the first was on February 14, at the same location). Yesterday, November 11, I saw and photographed two Snow Buntings on the rocky northeast shoreline of Randall’s Island, opposite ball fields 39 and 40. They have been reported continuing at the this spot again today.

In other birding news, the cold front that passed through on the morning of November 10 brought strong northwesterly winds all day, which led to decent raptor and waterfowl flight. It was the first productive day for observing diurnal flight in Manhattan for over a month. We have been stuck in a cycle of either southerly winds (driven by strong low pressure systems) or northeasterly winds.

The latter are generally unproductive for seeing raptor flight over Central Park, as birds, which want to move west away from the coast anyway, are deflected even further west, over the Hudson and into New Jersey. For example, on November 8 the Quaker Ridge (CT) hawk watch had a record-high one-day total of 277 Red-shouldered Hawks. Manhattan birders reported none that day.

At Inwood Hill Park on November 10 I tallied some new birds for the year: Northern Harrier, Bonaparte’s Gull, and Snow Goose, bringing my 2017 New York County total to 209.  I had only a single Red-shouldered Hawk there. I had Northern Harrier in Central Park again upon my return just before 2 p.m.