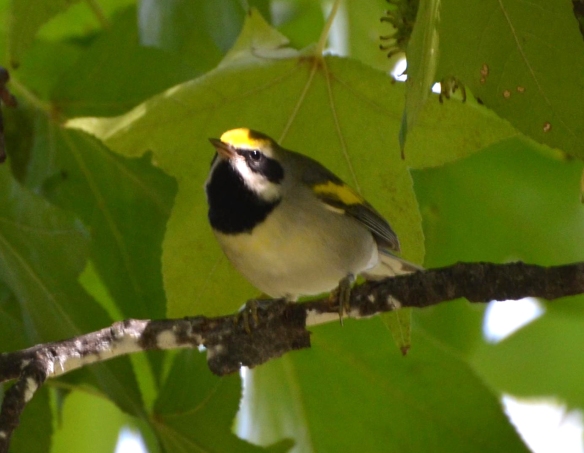 The last section of my book discussed relative warbler rarity in Manhattan. At the time I wrote it, I did not believe that enough eBird data existed to reliably choose which of the 36 regularly-occurring warblers was the rarest (I settled on a top six). Four years later it is safe to say that this title goes to the Golden-winged Warbler.

[This species has suffered a severe decline in population. The Cornell Lab of Ornithology offers an excellent explanation here.]

I was fortunate to see one in September 2012 with many other observers at Strawberry Fields. The bird had been reported there at least twice, beginning in late morning, so it definitely was lingering in the area. Even so, observing it again required two hours of watching and waiting.

I vaguely recall a reliable message-board report of a Golden-winged Warbler at Maintenance in the fall of 2013, but it came much too late — perhaps the following day — to chase it. There also was a text-alert issued for one in the fall of 2014 at the Upper Lobe, which many chased — I was on the scene in ten minutes — but no one found.

Just this last May (2016) Andrew Farnsworth had a Golden-winged Warbler in East Midtown, but the bird was moving through trees so quickly that he was unable to keep it in sight and I abandoned the chase within minutes.

Fast-forward now to this past Saturday, 3 September 2016. At 4:16 p.m. Manhattan Bird Alert (on Twitter) was issued for a Golden-winged Warbler at Maintenance by the fenced-off storage area. I was there in ten minutes, but I saw no birders looking for it — a bad sign. Eventually the man who issued the alert returned, and in conversation I found that the alert actually was issued almost at least a half-hour late because of “technical difficulties” — which is to say an unlikely combination of a yet-earlier finder’s phone running out of power and  the eventual alerter initially sending his alert improperly so it was not re-tweeted.

Give a Golden-winged Warbler a half-hour head start late on a windy day and odds are it will not be found. I searched for two hours, and was later joined by upwards of ten other birders. No one got it. Still, a clear photograph of it perching by the chain fence was later posted on eBird, leaving no doubt that a male Golden-winged had been present earlier.

The very next morning Deborah Allen sent a Manhattan Bird Alert of a Golden-winged Warbler at 8:00 a.m. on the south end of Maintenance. I was in bed and did not see the alert until 8:07. Twenty minutes later I was at Maintenance looking for the bird, which turned out, as I learned from Deborah, to be different from yesterday’s — this time a female.

It was a pleasant, clear Sunday, and many birders searched Maintenance and the surrounding area trying to find the Golden-winged. Again, none succeeded. It appears that there was again a delay (11 minutes) from initial sighting to the time of report. I did not have a good reason to be birding early that morning, as the northeast winds, blowing for a second straight night, were likely to drain the park of birds while doing little to refill it, and that is just how things went. My response to the alert was slow, but another birder already was in the Ramble and chased the alert immediately. He did not get it, either.